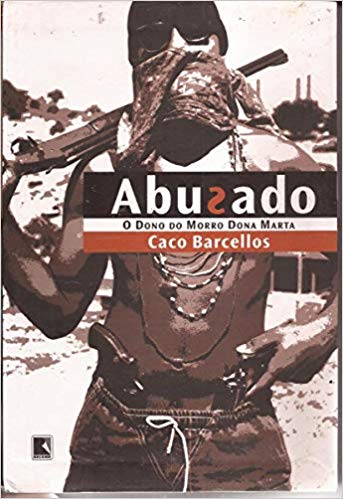 Tough Guy - Morro Dona Marta's big boss [1] is the third book published by the Gaúcho writer  Caco Barcellos, released in 2003. It is an investigative journalistic book, which tells the story of "Juliano VP", a fictitious name for drug dealer Márcio Amaro de Oliveira, that was raised in Rio de Janeiro's favela Santa Marta, and his early relationship with the trade.

Considered one of the most controversial writings of the journalist, Tough Guy shows a side that was until then unknown to society, the humane side of drug dealers. The emotional side of such figures is shown through accounts and testimonies that reveal their difficult childhoods, the closeness to the drug trade, a troubled relationship with the police or governmental institutions, and mainly the history and impact in the community's life that is promoted by criminal organisations such as Comando Vermelho and their rival criminal groups, Amigos dos Amigos and Terceiro Comando. The book raises questions about ethics, morals and politics, which had never been observed through this angle, through marginalized and socially excluded people who are rarely heard or seen by newspapers and magazines. Renowned Brazilian journalist Caco Barcellos dives deeply into the community's stories and daily life, with techniques frequently used in journalism and historical research. The book is a non-manicheistic novel. There are no good or bad guys, and all characters in it are depicted as human beings that have been      exposed to all sorts of external violence, mainly survival laws. The book does not only tell the story of an ordinary person, but reconstructs the moments through which many people from Rio de Janeiro went, such as shootings, intensive getaways, and murders.

Juliano VP´s story is directly related to the existence of Comando Vermelho and its occupation in favela Botafogo, a carioca mid-class neighborhood. Since he was little, Juliano lived with many different types of prejudice. He was born in a family from the Northwestern region of Brasil and got to Santa Marta as a quite poor person, looking for better living conditions.

His rough and chauvinistic father ran a small candy and sugary drinks shop to keep the family. Juliano studied in the morning and helped his father in the family's business during the afternoon. Getting no payment for his work and going through constant humiliations and violence and from his father, he started to become more interested in the busy and luxurious lives of drug dealers and criminals of the region      he lived in. Little by little, he lost interest in school, yet he was still keen on       books and writers. He started doing small favors for reasonable amounts of money, so-called "bicos that ranged from delivering information, purchases, and merchandise up the hill. His rise in the drug dealing business was fast and complex, because it was quite influenced by the Comando Vermelho´s motto,       Peace, Justice and Freedom, albeit      in its literal sense. Juliano thought that things should be resolved in a pacific way and that the community's welfare should come first. This sort of behavior, combined with his literary taste that was considered "refined" by the people involved in the trade, rendered him the codename "Poeta" (poet), mainly because he rubbed shoulders       with the high carioca bourgeois intellectuals such as the cineast João Moreira Salles.

Little by little, such behavior started      getting less and less approval from the leaders of CV themselves, and Juliano made many enemies that did not believe in his potential to become the hill's Big Boss, because he did not kill people, he despised money, and had

political ideologies and intentions that were very different from those of  the morro's "frontlines". The book is a surprise because of the simplicity and also because of the story of one of the most looked after men in Rio de Janeiro. At the same time, the book draws a parallel between the development of favela Santa Marta in Zona Sul and the locals' struggles to face prejudice against the favela, and also drugs and violence in such inhumane conditions.

Another important point that was approached by the author was the controversy with pop star Michael Jackson and      film director Spike Lee, who came to Brasil in 1996 to record a music video in favela Dona Marta. Juliano VP made sure to personally take responsibility for the king of pop and his team's security. For that, he provided them with houses, working men and protection. Such an attitude highlighted the fragility of the police and how notorious the dealer was.

Description: the book cover shows a man with his face covered by sunglasses and a scarf. He has no shirt on and is holding a rifle, he also has guns in his trousers' waistband.