The Juntos pelo Complexo do Alemão collective is an union of existing groupsand leaders in Complexo do Alemão, founded in 2013, to monitor, communicate, pressure, demand and report issues relevant to the development of the Complexo.

In the early hours of December 11, 2013, an intense rain fell on the city of Rio de Janeiro, causing a great impact in the northern part of the city. It reached the Complexo do Alemão, leaving more than a hundred families homeless, and many more at risk. In the late afternoon of the same day, the situation in the Complexo was dire. Several families left their homes and went to stay with relatives or to makeshift shelters. In several locations there were threats of landslides and housing collapses. Many residents turned to local activists and institutions, reporting the risks to their homes. Civil defense was slow to answer calls. The rain continued to fall, with less intensity but continuously. This posed a threat to many families, who feared staying in their homes, but also had nowhere to go or were afraid to leave their homes and not be able to return afterward.

A group comprised of residents, who work informally or institutionally in the Complexo, took control of the efforts to help families: they identified homes at risk, improvised shelters and created a large mobilization for donations to the homeless. From there, the Juntos pela Complexo do Alemão Collective was formed, which dialogued with entities and actors from both civil society and public bodies. It operated especially through informal channels of exchange and social networking, Facebook in particular. The Juntos pelo Complexo do Alemão group was one of the efforts developed to face the impacts of the storm; it became the largest movement and consequently took the lead in negotiations with various governmental and non-governmental bodies.

We consider it a grassroots surveillance movement, which emerged on the occasion of a particular event and whose dynamism enabled the activation of the social practices and knowledge accumulated by the residents. As such it is a recognized form of local solidarity, accumulating the experience of previous community mobilization forums; at the same time, it grew and adaptedvia media and social networking technologies, which were already being used by residents and collectives. Faced with the chaotic effects of the storm, the favela spoke through its solidarity networks and reconstituted its community organization, which had already beenshaken by the effects of the political dynamics of PAC Favelas and the entry of the UPP (Pacifying Police Units). It expanded its channels of dialogue, communicating with different external social agents and became involved in various ways in the struggles for the expansion of social and human rights. It is worth reflecting here on the particularity of this movement and which pathways it has forged in terms of popular participation and the relationships of a collective with public authorities and with the city itself.

The intensity of the information exchange via virtual social networking led to the creation of Facebook pages. On december 11th, the first Complexo do Alemão SOS group was created and on the 12th, Alan Brum Pinheiro, coordinator of Instituto Raízes em Movimento (the Roots in Movement Institute) and researcher for this project, inaugurated the Juntos pelo Complexo do Alemão page by posting the video of a house collapsing and reporting the collapse at Morro das Palmeiras, with the following testimony:

“Today the Complexo do Alemão awoke to bad news all around. Flooded streets in the immediate vicinity, I go up toCentralon Morro do Alemão and see a fallen barrier without any weight above it. I thought, if it fell here, imagine the pressure oftheconstruction in the different places we already knewabout! I arrived at the Raízes em Movimento Instituteand turned on the computer and started to connect to the people in our favela. First, houses that had collapsed in Matinha were reported by my companion and fellow warrior Renata Trajano. Suspected death at Pedra do Sapo, new collapses at Morro dos Mineiros, Morro do Adeus.. MY GOD!!! Soon after, new landslides in Pedra do Sapo were reported. In the meantime, we had also scheduled the visit with the UN Reporter for Water and Sanitation. I remembered that the PAC works that spent (deviated) 1 billion Reais did not manage to effectively carry out projects and policies that would alleviate all of that. What was gratifying to see was the coming together of the Raízes em MovimentoInstitutewith other groups and local institutions in an effort to understand the overall chaos in Complexo do Alemão. Occupy Alemão, Educap, Voice of the Community, Verdejar, Realidade do Alemão, Renata Trajano, Wagão, Carlos Coutinho and Marize all exchanging, walking through the favelas of Alemão, articulating, processing, asking for help. TOGETHER FOR THE COMPLEXO DO ALEMÃO. And the UN Reporter trapped in the chaotic traffic of the city. MEETING DEFERRED UNTIL TOMORROW, LEAVING FROM THE VERDEJAR, in Sapo. All of a sudden, another tragedy. Now at Morro das Palmeiras -- 20 houses about to collapse. No, just 10. The registerof our network arrives from there. It seems less serious than reported. Let's go. Arriving there, we see the families in despair, having been calling all day and only being told by the civil defense to wait. A 3-FLOOR HOUSE falling apart and about to collapse. We call and put pressure on civil defense. We return to the network. We publicize, we denounce. And the house is falling, breaking apart. . . it’s going to fall, it’s going to fall. . . Civil defense arrives at GeoRio and they realize the gravity of the problem. I take the camcorder and start recording. I talk to Jair and his young wife, who live in the house. He reports the despair since dawn and. . . IT’S GOING TO FALL, IT’S GOING TO FALL. . . THE HOUSE collapses on top of 4 or 5 others. Screaming, crying, more shouting. I return to Jair, now with his sister, who is thankful that everyone is alive and insists that we have to have strength and rebuild our homes. LET’S PULL OURSELVES TOGETHER, STRENGTH, RESISTANCE OF THESE PEOPLE THAT WAKE UP EVERY DAY, WORK AND RECONSTRUCT THEIR LIVES. We arefrom theComplexo, but we are of vigorand resistance WE ARE COMPLEXO DO ALEMÃO, ALWAYS.

Who makes up the Collective?

2020 | Together against the coronavirus

Once again, united to defend the favelas, the Collective focuses its forces on fighting the coronavirus. Whether receiving donations or providing support to the residents of Complexo do Alemão, it acts strongly in the territory. In addition, it makes important public policy disputes for the favela. You can check out the corresponding manifest by clicking here.

Donations to fight the Coronavirus can be made via donation of supplies and groceries or in cash, through deposits or bank transfers to the collectives:

The Collective distributed basic food baskets to some families in Complexo do Alemão according to residents’ registration, the vast majority of whom were black women, mothers, housewives and, also, many elderly women taking charge of the situation. All the material was the result of donations to help reduce the impacts of the Coronavirus pandemic on the favela. 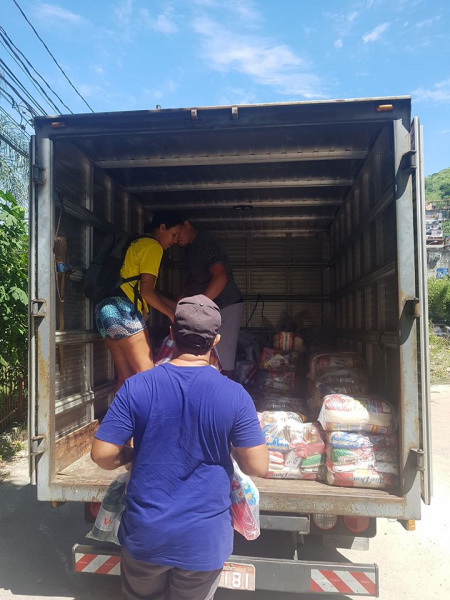 The Collective sent a megaphone-equipped car through the streets of Complexo do Alemão, asking the population to take the necessary precautions against Covid19 and, if they can, to STAY HOME.

Graffiti against the Coronavirus

David Amen, from the Collective, did graffiti in the Complexo do Alemão in a communication effort to warn against COVID-19.

If you can, stay home. #covid19nasfavelas

The Collective's activity spread banners across the Complexo do Alemão, using direct communication to convey the Coronavirus care message.

Attention! Wash your hands frequently with water and soap, or at least use antibacterial gel to maintain hygiene. Stay home! #covid19nasfavelas 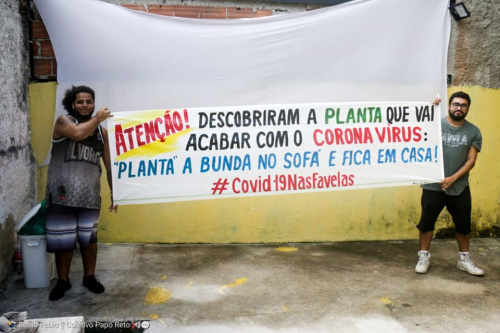 The Plant that Saves:

Attention! They discovered the “plant” that’s going to cure the Coronavirus:

‘Plant’ your ass on the couch and stay home!